Political odds, as seen through prices

Market action displays an ever-increasing sensitivity to fundamental news and/or political decisions, which should hardly come as a surprise. We live in a world of immediate reactions —as well illustrated by our traditional media and social networks. Markets, as core expressions of human behavior, simply follow the trend.

At BBSP, we witness and experience this phenomenon day after day. A price chart can often offer as valuable an outlook/opinion on a public issue as the insights of your favorite political analyst.  A quick look at the price history of a relevant asset will very often prove illuminating.

There are however, peculiarities to this approach. First, market action is never a one-man stance. The picture often becomes unclear, and is always shifting/moving. Market action is a chaotic, collective, and dynamic process. Reflecting the interactions of thousands concerned parties, both human traders and automated systems alike. A case may be made for the eventual emergence of some collective form of intelligence, but it is rarely instantaneous. The levels of information and respective strategies vary wildly. It can often take  time for accurate data to permeate down to most rational actors, and for a consensus, if any to be drawn. These same dynamics can be demonstrated at work in other chaotic systems, such as the weather, and fluid flows. Episodes of unpredictable disturbances, followed by episodes of a fragile equilibrium that may be partly anticipated. Our job at BBSP, is to detect and map the undercurrents, speculating on the most likely outcomes.

In essence, price action reflects nothing more than a market consensus, or often the absence of one. It can be read as a ‘comment’ upon any general underlying situation. Of course, one could study such  consensus from other sources, for example social networks, or gambling sites. However, these networks can be manipulated,  betting houses skew the odds to maintain their ‘edge’ for example. . We believe that financial markets remain the most objective and reliable thermometer of shared opinions, as long as such opinions are of importance to participants.

Getting down to the Sterling.

The case in point is the UK general election that’s to take place on December 12th; and the asset, the GBP/USD exchange rate.

(As a reminder, if that rate goes up, it implies that one British pound will buy more US dollars and cents: in other words, traders would be seeing the British economy as stronger than s before, or vice versa the U.S. economy as weaker.)

Here is the chart, along with our analysis — and the parallel with the economic and political context is rather obvious. The downward move from peak I to trough II covers PM Theresa May’s last negotiations with the Parliament, and the beginnings of the Johnson ministry. 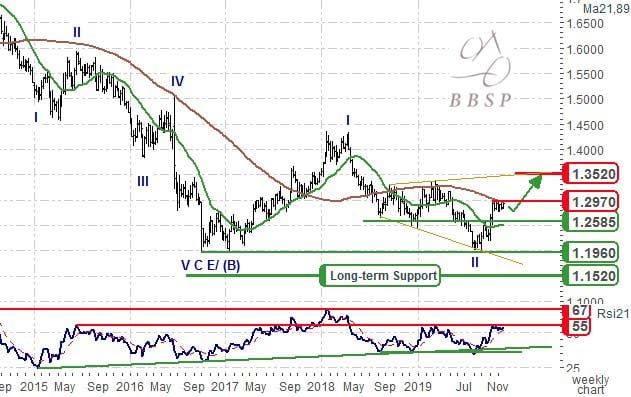 Since October 18th (those are the very last bars in our chart), the pair has been constrained sideways — which we illustrate by plotting its 89-Week moving average, that has been capping the market for some time. Breaking up, or down, this lagging indicator should be a notable sign of any new emerging consensus. Interestingly, it’s already being challenged with the pair hovering around that area.

It’s worth mentioning that the beginning of the sideways movement coincided with the decisive Saturday event when Parliament started its marathon session, which should soon come to an end.

Now, analyzing the price dynamics on a large scale, we find some characteristic tempos, leading us to expect that the pair will break through said resistance to follow the uptrend started this summer—towards 1.3210, then 1.3520.

The main support holding this view stands at 1.2585. Should that level be broken down, our scenario would be defeated—we’d expect then a downward acceleration to 1.1960 and 1.1520.

Yet the consensus, in our view, favors the upside, especially since the same signals are shaping up for the EUR/GBP (i.e., an appreciation of the GBP). Such correlations always make strong points for an analyst. Here, the parallelism tends to confirm that most FOREX actors are considering betting on the pound — instead of betting against the greenback.

At the same time, it should be noted that British bookmakers are still favoring the Tories for the general election—though with lengthened odds.

So, if you ask us, we’d say that things are not looking so bad for Mr. Johnson’s Brexit plans: at least, that’s the shared view that can be inferred from price history.

Established in 1990, BBSP is a leading independent research firm with offices in Paris, Singapore and Montreal.

BBSP’s research team comprises over 15 technical analysts allowing us to produce continuous analysis on over 300 markets and provide a high level of reactivity and personalization. 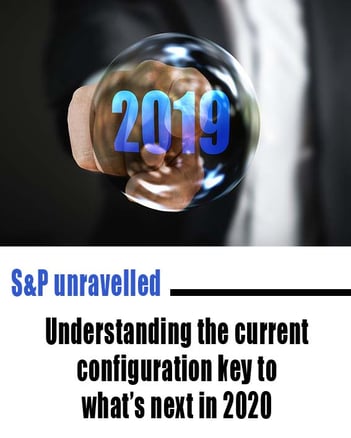 Sign up to our upcoming Video explanation on S&P
By Philippe Sadock, BBSP CEO, Chief Strategist